Yesterday was a fabulous day! First, I got to go to my second Buccaneers game. This is crazy to me because after maaaaaaaaaaaaaaaaany years of never having an opportunity to go to one, I’ve been to TWO actual games this season alone. In 2014 (I think it was) C1Bank sent me to my first pre-season game, but this season I’ve been to not one, but two real games and it’s just the neatest thing ever. Sure, it stinks that the Bucs have a notorious reputation for choking even when they are ahead, but yesterday we WON! I can’t even explain how amazing the energy was. 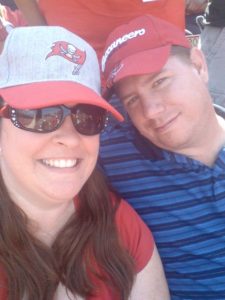 And, I now have my very own Bucs shirt because they gave the crowd free shirts for attending. How cool is that?!? Best part? They gave us two extras because they had so many and we can use those for Christmas gifts! This is what the shirt looks like: 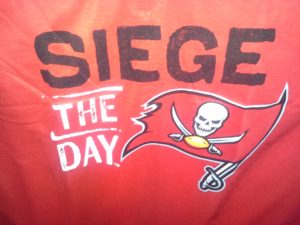 It was also a fabulous day because my hubby and I went to Chipotle for lunch and had a little bit of unexpected income come our way. Loving the manifest your money game. I told Santa recently that I desire $10,000 a month, so I’m taking this extra income as a nod from the Universe that my big paydays ARE coming down the pike 😀

After the game it was a lazy night of watching a movie and eating a yummy dinner of pasta with meat sauce. Overall it just felt like one of the best Sundays I’ve had in a while. I love happy and fun weekends and look forward to many more of them!!