Okay, so there has been something on my mind lately, and it’s really been bugging me. I’ve noticed an issue taking over me and during a recent getaway it came to a head. Just a week ago I was at an event that was supposed to simply be a fun experience filled with food, wine and friends. Luckily, it was also an epiphany waiting to happen. What happened? I realized I was letting alcohol become too much of an addiction….again.

In 2013 I had this same realization. That year, I noticed myself beginning to crave alcohol. I was craving the buzz. Craving the fun that was supposed to come with it. And so, when I got home from a 2013 event where I’d overindulged I forced myself to take a 30 day fast from alcohol. It lead to a longer period of course, but the idea behind it was to stop wanting to drink merely for the sake of drinking. Long story short, I finally got a handle on it and only drank occasionally, because then and even now I feel that an occasional drink is fine. The kicker is you have to be able to keep it in check.

During 2014 all was well, but in 2015 I noticed my old habits were starting to creep up once more. I convinced myself that what was happening is that I was simply stressed. A glass or two of wine was all I needed to chill out and relax. It was under control and no big deal. Enter 2016… 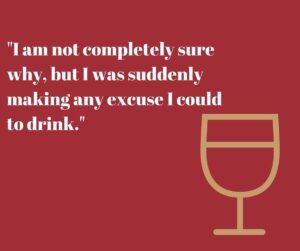 I am not completely sure why, but I was suddenly making any excuse I could to drink. I would invite people to cocktails, head to networking events where I knew there would be alcohol, even cash in on alcohol rebates because I knew it meant an excuse to buy bottles.

Without even really noticing it, alcohol was becoming the forefront of my reasoning behind hanging out. Constantly craving the buzz and “fun” that would come with it. Then, recently my drinking desires came to a head. I didn’t intend it to happen quite like this, but in a weird way, I’m glad it did.

I got to go to an event that centered on food, and more importantly to me – wine. Taking it as the perfect excuse to indulge I bought a bottle of wine for my room and my roommate purchased little liquor bottles to continue the party. Throughout the weekend I knew I was overdoing it, and I continued anyway because all I wanted was that damn buzz and some “fun”.

I took myself away from the event, called my husband and told him I knew I was taking things too far. Against my better judgement I was letting my addiction to alcohol take over. I told him how sorry I was and that I needed his help.

Long story short, I made it home and on the Monday after the event, I had my last drink. Even though I said to myself I wouldn’t drink it, I did and it pissed me off so badly I poured out every bit of alcohol I had in my liquor cabinet and then I gave away the full bottles I had been saving for a special occasion.

Will it be my last drink for the rest of my life? No. But, for now, I have to stop drinking. Why? The simple fact is when I realize I’m letting something consume me for the worst, I have to stop it. I know I’ve been drinking too much and I can feel myself let it control me. I know me, and I know if I don’t squash this right now, it could get really bad.

I had another long talk with my husband after pouring out the alcohol from our apartment and I told him of my plans to stop drinking. I apologized for allowing myself to come this close to being full blown addicted, and asked him to help me get over the desire for alcohol. He hugged me and told me he loved me, then told me he would help me through this. Thank God for this man! So, that was it- I had made him, and more importantly myself, the promise of quitting drinking for now, maybe forever.

Tuesday night after my resolve to quit I went to a networking event and people were shocked I didn’t want any wine. That further proved to me it’s become a problem that I must take care of immediately. I don’t want to be the girl who let’s ANYTHING control her. To feel like I have no control is one of the worst feelings I’ve ever felt. It’s why I work for myself, it’s why I make and follow my own rules, and now it’s why I’ve quit drinking.

So, today makes one week since alcohol has been in my system, and I refuse to drink another drink of it until I can be 100% sure it won’t become a problem. This might mean I don’t drink for a year, this might mean I never drink again, and for me that’s okay. It means I’m taking back control and controlling my own life is the best buzz of all time!