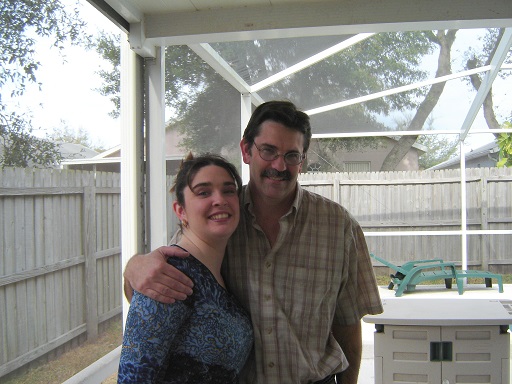 On December 27, 2016, my father (pictured above) took his own life. This photo is more than 13 years old, but it’s how I’m choosing to remember my dad – with a smile and seemingly happy. The photos of him in recent years are sad, much like his own mind was. About three years after this photo was taken, he lost his job – a job that he had worked like hell to keep for nearly two decades. A job that despite his illnesses, he kept and continued to work hard at regardless of pain he might have had that day.

Doctors told him that his illnesses were stress related – a diagnosis I’ve been dealing with myself since I first went off to college. Dis-ease, the body’s state of dis – ease can cause it to become ill, and I think that is where my dad’s ailments originated.  Looking back, dad was never happy. He was always stressed. Unfortunately, I take a lot of that after him.

When my husband learned that my dad took his own life, he told me he was instantly scared for me. He confessed that it broke his heart watching me act a lot like my father – always stressed, always looking at the negative, always in a state of dis-ease. This state I’ve allowed myself into for so many years has caused weight gain in me, tension in my relationships, struggle in my business, and so much more.

I’m raising money to help my mom with the bills dad left behind. Please help if you can here. Thank you so much!

My husband said point blank that his fear was I could just as easily go down a path of sadness, depression and ultimately some form of suicide if I didn’t course correct starting immediately. I think part of the reason I’m so shaken by my dad’s choice to end his life is because I know deep down just how right my husband is that if left unchecked, my patterns could go down a very dark path. In fact, they have in the past. I don’t talk about how dark I’ve gone, but those times scared the hell out of me.

One night after my father’s passing, my husband and I got to talking about my negativity, stress and depression. During our talk, he taught me a trick that is helping me not only to cope with my dad’s death, but also is helping me to be genuinely happier. It’s only been about two weeks since my husband taught me this trick, however, it’s wild to me that it’s helping me as much as it is. Because it’s helping me, I’m sharing it with you. It’s so simple, but has had an unimaginable effect on me.

Whenever I am starting to think negative thoughts and/or going into a dark space in my mind, he told me to stop, take a deep breath, and run down a list of things I’m grateful for. He said I might feel silly, but until this trick gets ingrained in me, he suggested I say these things out loud. He said to always start with the most important thing to be grateful for, and in his eyes that’s the fact I’m alive. My go to mantra lately has been:

I’m alive. I have a loving husband. I have the cutest dogs. I had a yummy breakfast. I have a roof over my head. I have running water… And on and on I go until the negative thought escapes, or at least dissipates enough that I am no longer triggered by it.

And so, this is what I’ve been doing as many as 20-30 times a day as these horribly negative thoughts come into my head. I literally will take notice of the fact I’m feeling down, stop, take a deep breath, and begin my mantra….

I’m alive. I have a loving husband. I have the cutest dogs…

This simple trick is actually making me feel better than I have in years. It’s put a smile on my face many times, even in the midst of this tragedy. It’s not always the same words, but it does always start with “I’m alive and have a loving husband.” I will keep practicing this trick until it becomes second nature because I honestly want to live as happy of a life as possible for as many years as possible before my time here on earth is done.

I’m alive. I have a loving husband. I have the cutest dogs….

I do plan on visiting with a counselor. This is something that I’ve been asked many times since my dad left my family if I would do. Yes, I will. And, I do plan on joining a support group for additional help coping. But, for now…I’m choosing as much happiness as possible. This simple trick is helping me. I hope it helps you too.

Can you help me help my mom? Anything would be appreciated!